The latest version (4.2.1) of Oracle Big Data Lite VM, among many additions, now includes also the much-expected Oracle Big Data Discovery (v. 1.1), which I had not played with so far (it is a new product); so I thought to take it for a ride.

Since my test data included geolocation attributes (latitude/longitude), one of the first things I was eager to try was some map visualization; after failing again and again to come up with even the simplest map viz, I started digging into the documentation.

The Map component of the Big Data Discovery (BDD) uses Oracle MapViewer to display the map (see ‘Configuring the Map connection to Oracle MapViewer‘ in BDD documentation); the URL for the connection is set in Configuration Options (upper right screen corner) -> Control Panel -> Studio Settings -> df.mapViewer, as shown below: 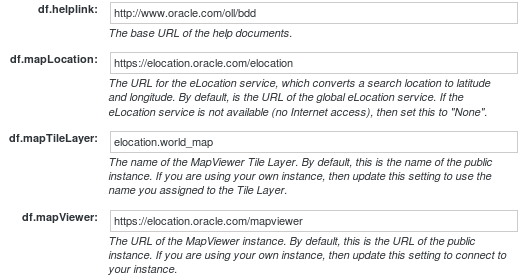 The df.mapViewer parameter was correctly set to its default value, i.e. the public instance of Oracle MapViewer; nevertheless, I could not render any map visualizations…

After some more digging and experimentation, it turned out that, for some reason, in this version of the VM appliance, the domain name elocation.oracle.com was included in the /etc/hosts file, as an alias for the localhost 127.0.0.1 (scroll right):

So, after editing the file to remove the subject domain name (you will need superuser privileges with su), I was at last able to see some map visualizations (more in the next post).

A final note: it had already struck me as kind of unusual for my taste that the help button (upper right) leads to the video tutorials of the BDD Learning Library, instead of the official documentation, as one might expect; so, if you would like to change this, just set accordingly the df.helplink parameter shown in the image above.

Christos - Iraklis Tsatsoulis
Christos - Iraklis is one of our resident Data Scientists. He holds advanced graduate degrees in applied mathematics, engineering, and computing. He has been awarded both Chartered Engineer and Chartered Manager status in the UK, as well as Master status in Kaggle.com due to "consistent and stellar results" in predictive analytics contests.

[…] just in case you are also going to use Oracle Big Data Discovery in the VM, be sure to check this post too for a configuration […]